Anchor Bay is a popular shore dive site located near Mellieha on the northwest coast of Malta. Anchor Bay is a small inlet hidden between two cliffs, best known for the film set village built for Popeye movie, and the whole bay is sometimes referred as Popeye Village after the theme park.

Shore dive sites in Anchor Bay are of course a large anchor, a beautiful cave, a varied reef, and a shallow training area. A small wreck is located further ashore. The maximum depth in the bay is around 12 metres; this easy dive site is suitable for all levels of divers. Anchor Bay is good for try dives and training dives, for the second dive of the day, and for night diving. The bay is popular place for swimming, snorkelling and sunbathing too.

Anchor Bay’s cave, also known as Scorpion Cave, is a large cavern with a wide entrance and an airpocket. Even the less experienced divers can visit the cave.

The wreck of MV Scotscraig is located about 500 m northwest from Anchor Bay. This is a boat dive; the wreck is too far to dive from the shore. Scot Craig was used in filming Popeye movie and is therefore also known as Popeye’s Barge.

Anchor Bay’s entry/exit point is the concrete jetty on the south side of the bay opposite Popeye Village, and can be reached following a dirt road. The jetty has ladders inside the bay side. Anchor Bay is usually dived when the north-easterly wind is strong and prevents diving in many areas. Visibility in the bay can be very poor when the weather is bad. Beware of tourist boats and currents when diving in Anchor Bay.

Popeye Village in Anchor Bay was originally built as a film set for Popeye movie. The musical film starring Robin Williams was based on a comic strip and cartoon series of the same name. The construction of Sweethaven village began in June 1979 and was completed in seven months, including nineteen wooden buildings and other structures.

Popeye movie was shot in Malta between January and June 1980 and released in December 1980. Thereafter the timber village of Sweethaven with its old wooden houses has been turned into a theme park called Popeye Village which is now a popular tourist attraction. The place also offers a special experience for divers to start and end the dive in the middle of a movie scene. The colourful village makes a nice background for surface photos.

The concrete jetty used as entry/exit point for dives was constructed for unloading materials brought in by sea when building Sweethaven and as a breakwater around Anchor Bay's mouth to protect the set during the shooting. Also used for the filming of Popeye movie was MV Scotscraig barge which later sank, and the wreck is now located few hundred metres from Anchor Bay.

Anchor Bay dive site features a large anchor and its anchor chain. The anchor is about 3m in length, and lies on sand around 8m deep. 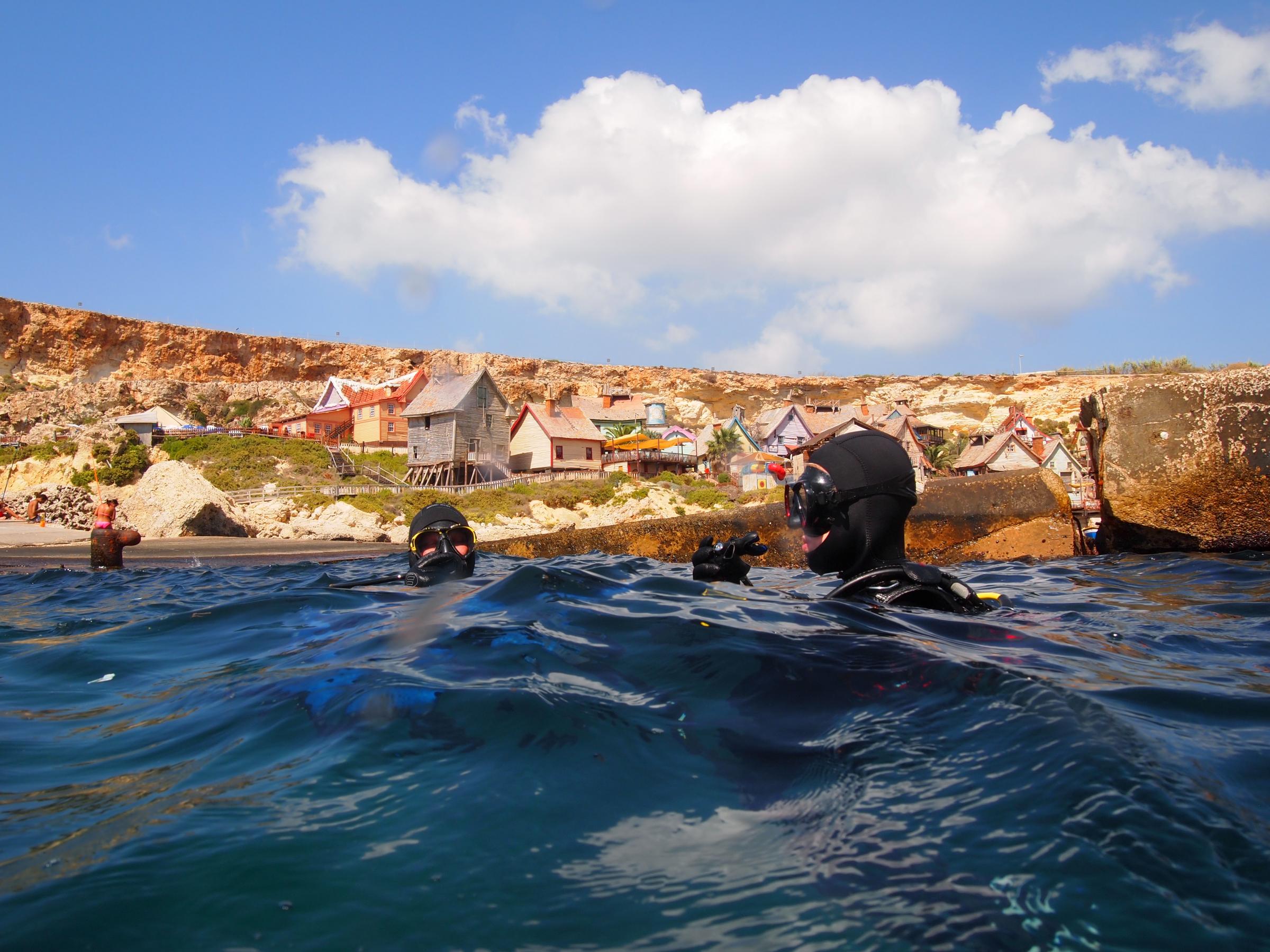 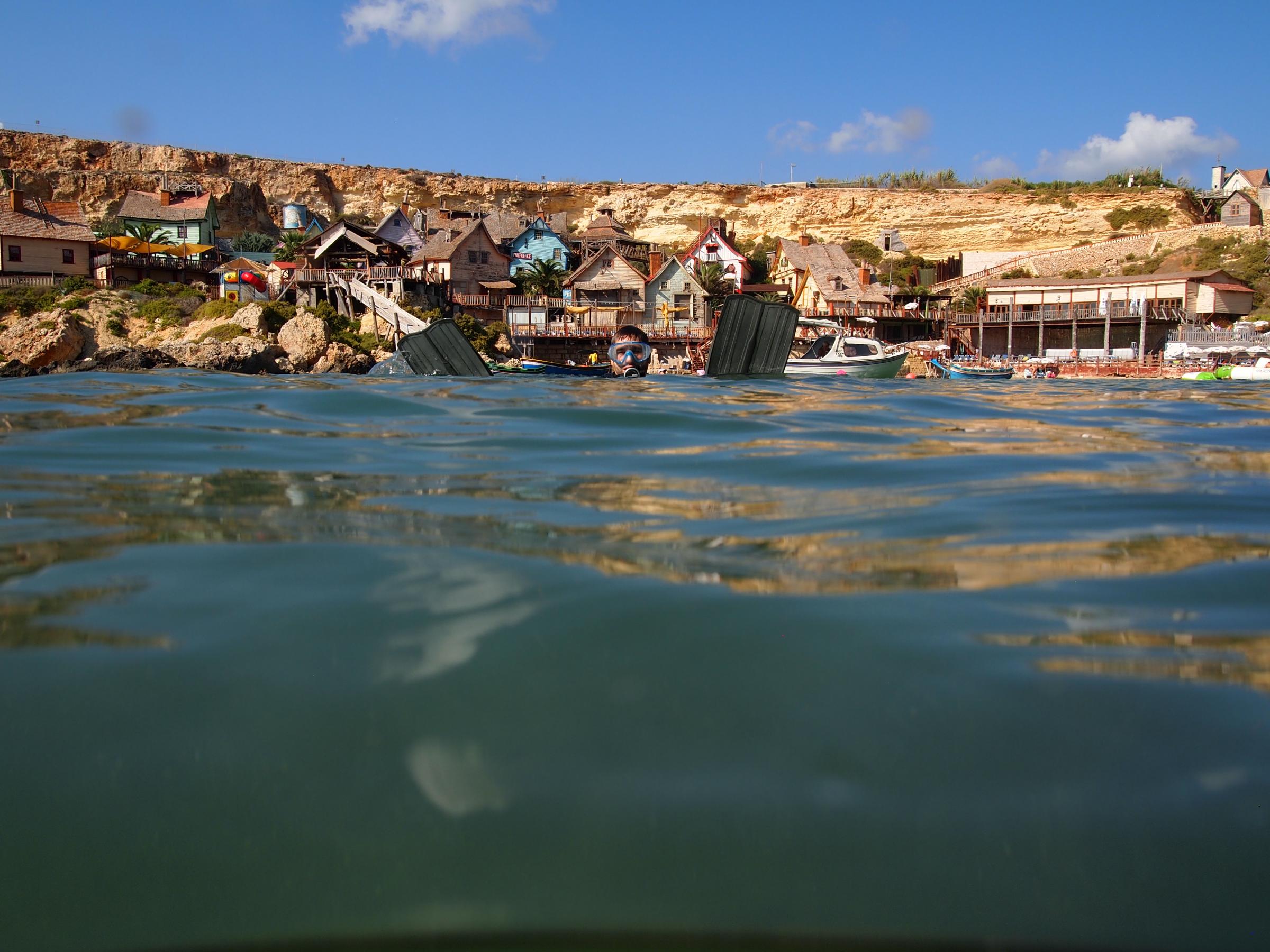